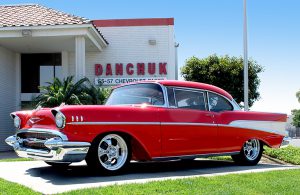 Before. The car as it was done in 2006. Body off, acid dipped, Morrison GT55 chassis, Edelbrock crate motor, custom interior, painted Torch Red, American Racing Wheels…and on and on…nice car. 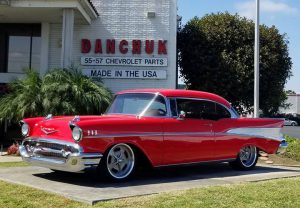 After. The car after the update and frame off for 2019.

Back in 2006 Danchuk conducted an experiment.  We always said if you had a body you could build an entire car out of our catalog so we decided to put that to the test by building a 57 Resto-Mod for the 50th anniversary of the 1957 Chevy.  The car came out really nice and it was built with items readily available in the Danchuk catalog.  It has been displayed on the front lawn of our building in Santa Ana, California ever since.  Super Chevy even dubbed it “Lawn Art” in an article they did on the car back in 2008.  (You can see everything about that build by clicking HERE).

Now you would think that a clean up of a 12 year old frame off restoration, acid dip down to metal..Morrison Chassis, nothing old, that was used as Lawn Art would go off without a hitch. Well, read on.  It was anything but…. END_OF_DOCUMENT_TOKEN_TO_BE_REPLACED

Please NOTE.  If you click on the thumbnail and then click on “view full size” on the bottom right of the page that opens you can see a really nice large version of the picture.  And then, if you click … Continue reading →

Aaron helped us out tremendously with the recent refresh of our ’57 Chevy 2-Door Hardtop.  In fact he went so far as to do a frame off restoration for us…

See all the photos from the re-build by clicking HERE.

So we wanted to tell you about him and his shop.

Orange County Hot Rods, in Corona, California is a family run full service restoration shop owned by Aaron Hamusek, a long time friend of Danchuk.  Aaron has owned and has been working on Tri-Five Chevy’s since he was in High School and if you ask him he will tell you that they are his passion.

Welcome to the Danchuk USA Blog where you can keep up to date on everything Danchuk and the goings on in the Tri-Five Chevy world.